At various stages in making a microchip, the surface of the wafer has to be made perfectly flat (planarized). This is done either to remove excess material, or to create a perfectly flat foundation for adding the next layer of circuit features. To do this, chipmakers use a process called chemical-mechanical planarization (CMP).

CMP removes and planarizes excess material on the wafer’s front surface by applying precise downforce across the backside of the wafer and pressing the front surface against a rotating pad of special material that also contains a mixture of chemicals and abrasives. To ensure that the right amount of material remains evenly across an entire 300mm wafer, the process must apply varying amounts of downforce during material removal, while stopping at the right point to avoid polishing away critical underlying features.

Applied's control system continuously measures film thickness at multiple points across the wafer and adjusts the polishing downforce several times each second to produce consistent results on every wafer. The entire CMP process is completed in as few as 60 seconds, including a post-polish clean during which the wafer is washed, rinsed, and dried before exiting the CMP system. 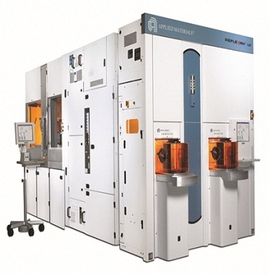